Meet The Man
Less guarded than his European counterparts, there’s an openness to Argentinean chef Martin Gimenez Castro that manifests itself in his cooking: though primarily known for his groundbreaking fine dining restaurant Salto, it’s in the Ceviche Bar that his character truly escapes. More than just a side project, you get the idea of a place run as a form of self-expression. Injecting his passion and personality into the venue, this is an address that punches through the greyness of everyday Warsaw. 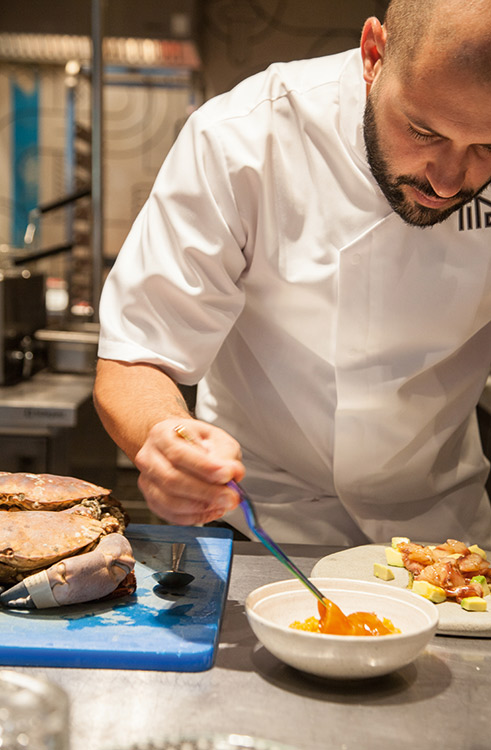 You’d Never Guess…
The introduction of Japanese influences to the menu isn’t a classic case of a chef losing his marbles, rather a direct reflection of Latin American dining habits. Unlikely though it sounds, both Argentina and its neighbors have long had a thriving Japanese community; 1886 saw the first Japanese citizen officially relocate to Argentina, and in 1908 a bona fide migratory wave began as Japanese farmers began moving en masse to escape the tight economic conditions of home. Today, Argentines of Japanese descent account for around 23,000 of the population, and over the decades their gastronomic tastes and traditions have become intertwined with the Argentine palate: resulting from this, find an incredible fusion of two disparate culinary cultures.

Order, Order!
Ceviche – raw fish marinated in citrus juices and cilantro – is the default order, with the Atun one of the best sellers: chunks of tuna given a rich zing with the addition of chili, lime and roasted coriander. For Japanese influences, look to the Corvina Con Nikkei, an artful composition of strips of corvina fish and a lush Nikkei sauce that utilizes soya, ginger, garlic, chili, coriander and oyster sauce to collide in one tasty jolt. But for the star, look no further than the salmon tiraditos: served with teriyaki and sweet potato mash, it’s a joy of satisfying sensations: sweet, dreamy, spicy, creamy.

Drink Up…
The ‘bar’ bit in the name isn’t a deceit, it’s there for a reason. From the outset, the idea was to blur the line between restaurant and hangout, to create the kind of place in which guests were as comfortable drinking as they were eating. In itself, that’s not a new concept, the difference being that at Ceviche Bar it genuinely comes together: here, the design, DJs and drinks work seamlessly to generate an ambiance that’s buzzy, energetic and something of a scene.

Yet though the cocktails have long been celebrated, the ante’s been upped by a new ‘Nikkei’ card that combines Peruvian and Japanese techniques and ingredients. Of the standouts, none earn higher praise than the Matero, a mix of Japanese yuzu citruses and Pisco infused with Yerba Mate. You won’t stop at one.