The Place
Always, the temptation exists to carve the city in two: Warsaw A (the left side) and Warsaw B (the right side). Doing so, however, overlooks that there’s also a Warsaw A Plus. Consider that to be Saska Kępa. An affluent enclave of elegance and class, The Bell befits the postcode: chic, contemporary interiors high on geometric patterning and polished craftsman’s touches – discreet, circular steel lighting, v-shaped wall tiles and sturdy wood finishes. 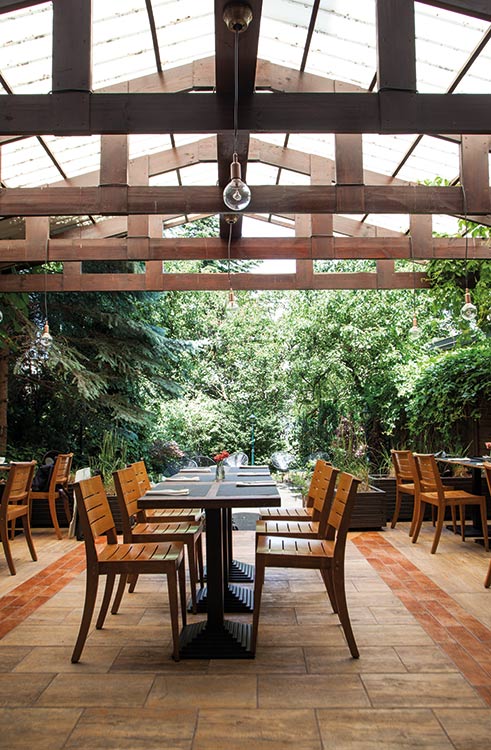 It’s all a pleasure to admire. But do so another time, for to visit The Bell and forego the garden is a crime punished by death. Cascading with greenery and plant life, this is a verdant, leafy sanctuary in which time seems to pause.

Chef
Step forward Jan Piecuch. Affable, conversational and confident, it’s the latter quality that shines out in his cooking. Raised largely in Nigeria, Piecuch’s international background has gifted the chef with an extraordinary palette and an experimental edge. Having launched, fixed and developed numerous restaurants about town, his latest posting has seen him deconstruct the menu and apply his own trademark style: in a nutshell, that means plenty of natural flavors given unexpected twists.

Kicking-off
Such is Poland, it all begins with beef tartar – and sure, while it looks like any other of the three thousand tartars the Insider has ordered, it it certainly doesn’t eat the same. Full of surprising bite and vigor, it’s a strong contender for our starter of the summer. 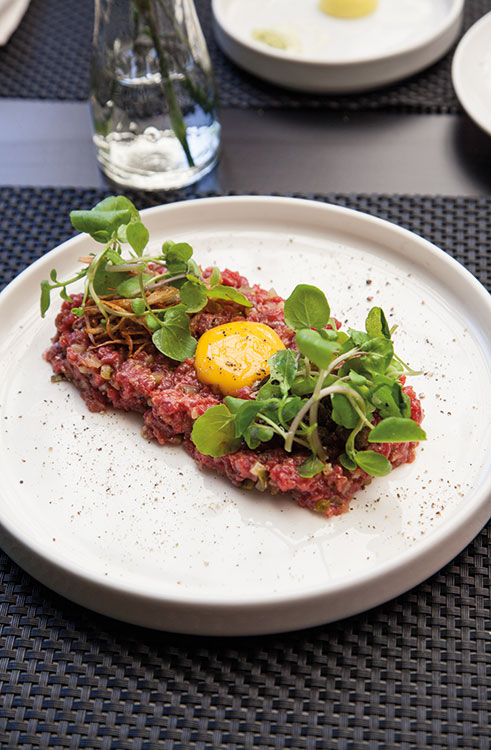 But wait, no it’s not, for then comes a marinated tuna with a vegetable salsa: fresh, light and zippy, this ceviche-style dish has been designed for the weather. Order it. But perhaps the biggest revelation, that’s the sorrel soup with pomegranate and chickpeas: deep and complex, tastes change and fluctuate with each spoonful taken.

The Main Event
Two standouts: first, halibut in miso, wild broccoli and sorrel sauce. I’ll readily confess, I’m not the biggest fish lover around, but a growing number of restaurants have led me to restock. Now, you can add The Bell to that list – firm and meaty yet delicate and moist, it’s a fish that flaps with the best. But this isn’t the only masterstroke that’s landed on the table. Opposite stands an aged entrecote showered with greens and accompanied with chips. The latter are like none you will have eaten in Warsaw before: crunchy on the outside but as fluffy as a cloud on the inside. As for the entrecote itself, that’s a hulking riot of raucous flavor: a man’s meal that leaves you feeling like a Flintstone.

Afters
If I’m in a restaurant, then dessert is never far away. And so, with the mains dispatched, a lemon tart swiftly arrives with a scoop of homemade vanilla ice cream: it’s an honest finish that’s subtle and dainty but with that sticky hint of goo that all desserts need.

Conclusions
Original in concept and flawless in its execution, The Bell is what Saska Kępa has been crying out for: somewhere stylish but not overtly fancy. This isn’t a place of gels and foams, of stupid plates and wacky ideas. The thought process behind both the restaurant and its menu has been logical and coherent; at the same time, and like all great magicians, Jan Piecuch knows how and when to introduce angles and accents you wouldn’t otherwise expect – he’s not being a smart arse there, he’s just being brilliant. (AW)