international134 koneser20 praga111
On The Eye Designed under the guidance of the world-renowned architect and designer Mirosław Nizio, it’s a space that impresses with an interior that...

On The Eye
Designed under the guidance of the world-renowned architect and designer Mirosław Nizio, it’s a space that impresses with an interior that revels in cast iron kilns, flooring produced from vodka barrels, long shadows and industrial bits and pieces that have been lovingly restored. 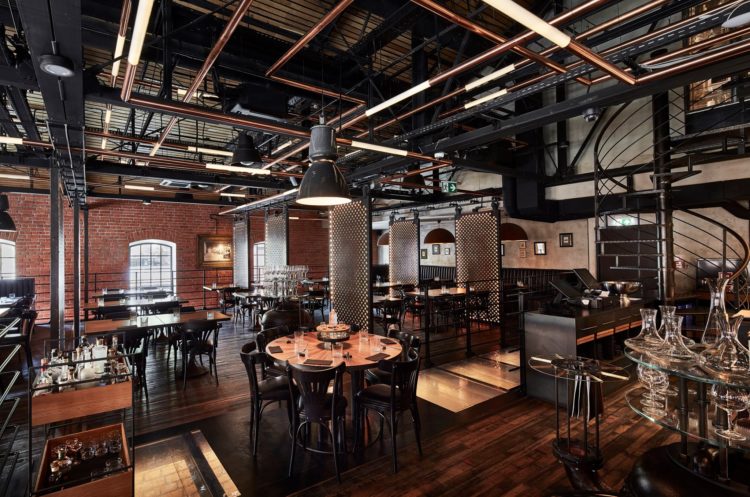 Sprawling, historic and not short on statement, it’s a fitting backdrop for a restaurant that is already regarded as the Pearl of Praga. But with Nizio, that’s something you expect.

Though arguably better known for his work with museums (he designed the core exhibitions of The Warsaw Rising Museum and The Polish Vodka Museum next door), his work with Zoni is to be equally admired. “The idea was to keep what was left,” he says of this post-industrial space, “which meant as many of the original components and infrastructure as we could.” 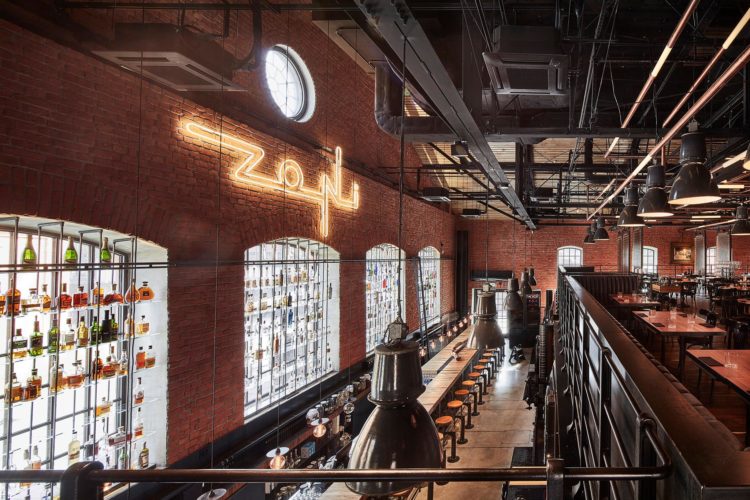 From this, what has developed is a moody but ambient space of black steel, warm copper and 19th century oak set against antique finds that are beautiful and curious: pre-war lamps, sepia photos and a 18th century mirror. “I’m not afraid to contrast rough or raw materials with beautiful things,” he says, “and I think what’s been created is a fluid space that has a flow and warmth.”

“I like to think the elements communicate with each other,” he continues, “and in the process we’ve given a second life to this building whilst simultaneously giving it a new touch.” 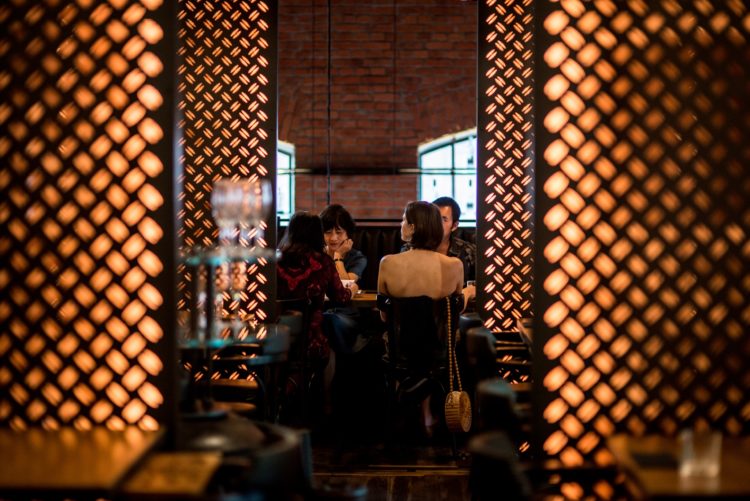 As such customized furniture like glass-and-steel wine cabinets and black leather upholstered sofas are offset against little amusements like cutlery holders that roll out from beneath the tables. Paired with carefully sourced additions such as classic chairs from Czech brand Thonet, it’s nothing short of an aesthetic victory that strikes all who visit.

“Fundamentally,” he says, “we wanted something that was actually quite simple, yet also sophisticated and elegant – I think that balance has been achieved.” The rest of Warsaw, it seems, would agree.

On The Plate
Formerly the Insider’s Young Chef of the Year, Michał Gniadek’s menu has seen a complete rebrand of the gastro concept and a committed foray into what he terms as “seasonal international cuisine with a Polish twist”.

If that sounds a little routine, it’s anything but, with the number of rave reviews that have followed proving an apt reflection of this chef’s huge talent. The starters alone say much with Agnolotti pasta expertly folded over Oscypek sheep’s cheese – oozing with gooey, cheesy greatness, is a complete reversal of the kind of stodgy Oscypek you’ve tried in the Tatras. 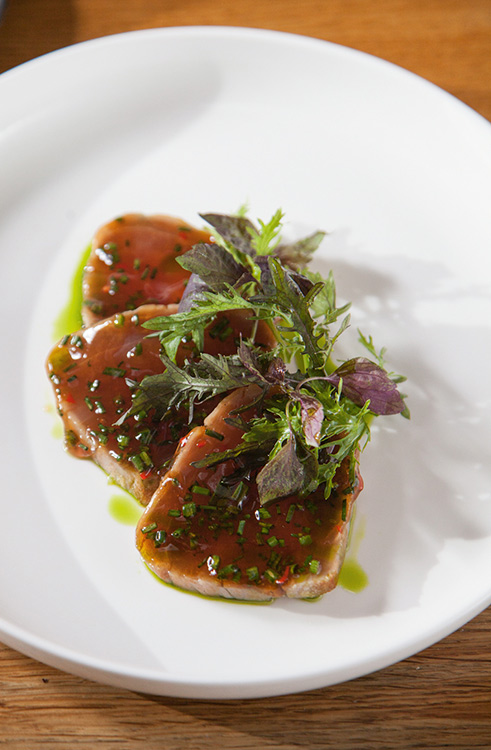 And so it continues: foie gras pate with marinated cherries and a scoop of truffle ice cream is an exercise in indulgence, while the tuna comes served tataki-style and with a rich slick of ponzu.

There is art, too, in the mains, the cod – cooked at low temperature and accompanied mussels and a delicate white wine sauce – offset by a manly thwunk of pork rib in BBQ sauce. Picking through it, the meat falling off the bone with the mere lightest of touches, it is with something that approaches a near reverential silence. 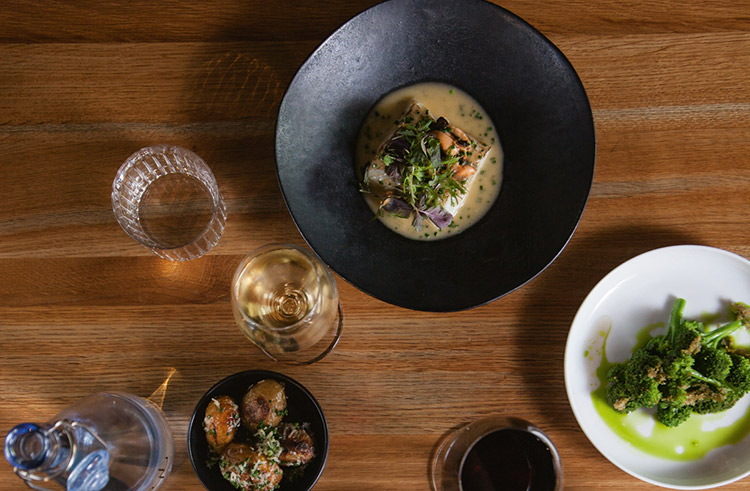 And this being Gniadek, desserts are also worth a mention: in our case, a blueberry crumble with lime and thyme ice cream and a sparkly sugar sherbert that fizzes in the mouth. Simply put, you are blown away by the playful creativity and big, banging tastes. 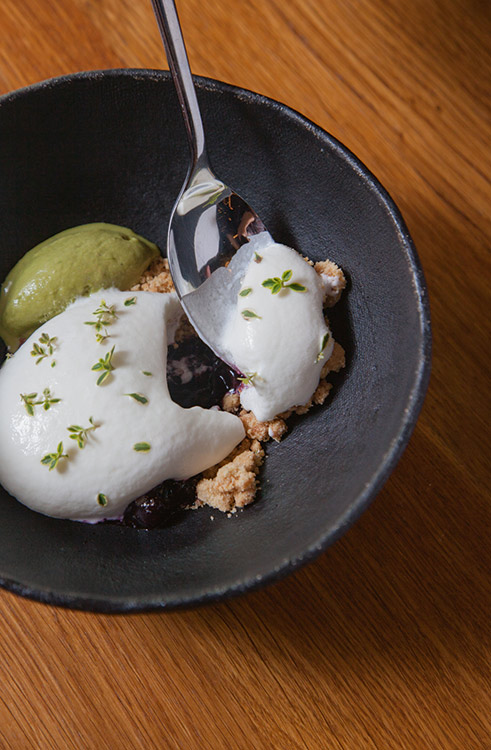 Handed the responsibility of taking charge of this kitchen, Gniadek has risen to the challenge – more so, he’s done this on his own terms, transforming the menu to mirror his strengths. The results are an exceptional adventure in a complete new direction. If this was once the Insider’s Young Chef of the Year, there’s much to suggest that he’s taken the next big step up.