Robata by Akashia – A Second Look

It’s not nice admitting it, but I do make mistakes – and in April, I appear to have made two. Clanger No. 1, I got the name of Robata by Akashia wrong, mistakenly spelling it Robota in my original copy. As for Boob No. 2, that was ignoring the Robata on the menu. Confused? Let me explain.

The restaurant’s name, of course, refers to the Robata grill found downstairs – to my endless embarrassment, it’s something I completely missed during my previous visit. Doh. No problem though, because this being my nearest restaurant I knew it was just a matter of time till the GF swayed me into giving Robata by Akashia a second chance. 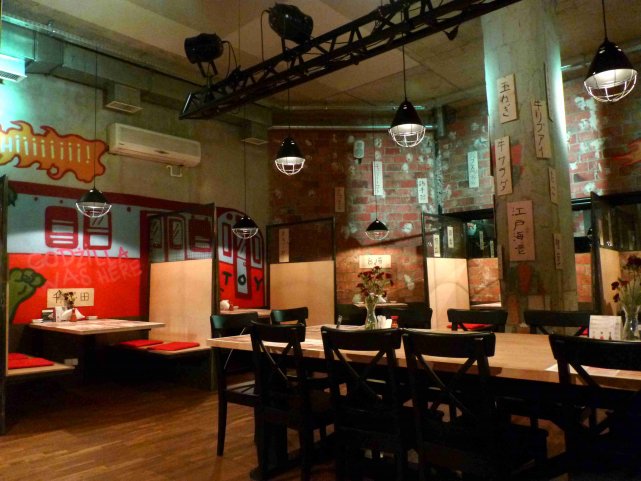 And I’m happy I did, for last night’s visit was the complete opposite to my previous – and rather underwhelming – visit. That’s good news, because there is a lot I wanted to like about the place. The design alone deserves a clap for offering something other than bamboo bits and bobbing boats. On the contrary, upstairs is raw and red and black (admittedly, a bit harsh for my sensitivities) while downstairs is more calming, though no less interesting: it’s like stepping into a Manga comic, what with the Godzilla graffiti and industrial format.

Placing my order with a waitress dressed in Tokyo ‘street style’, I decide to adopt a ‘spray and pray’ approach: ordering lots of little dishes in the hope something comes up trumps. In the event, everything does. 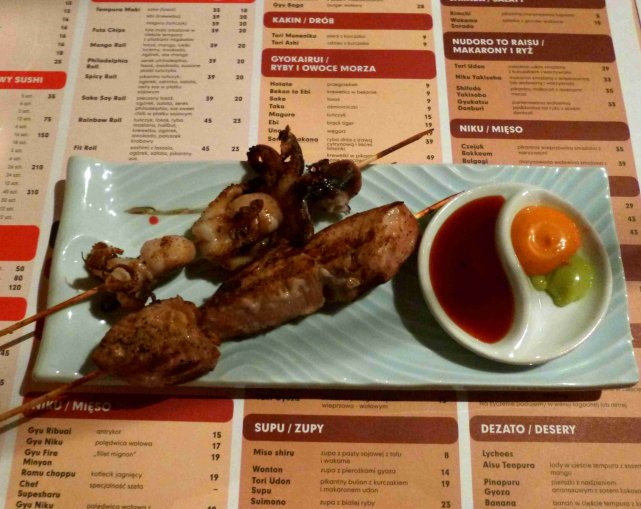 There is a skewer of tuna, with just the right sear, not to mention three octopi speared on a stick. Alongside them are a trio of sauces the highlight of which are colorful spots of wasabi and chili mayonnaise. There is a plate of filet mignon strips that are tantalizingly pink, and a serving of chicken wings: the skin is crisp, and the barbecue sauce big on flavor but never too overbearing. And for dessert, it’s pineapple dumplings in a coconut sauce. Checking no-one is looking, I lick the plate clean.

With a couple of drinks added, the bill comes to just under zł. 100. How can this be? I feel like I’ve sampled half of the menu, yet have come away with a light dent to the plastic. As I leave, I give the Japanese chef a cheeky thumbs-up and he smiles back like a man who has just done a good job. He has.