What Lies Beneath. Palace of Culture uncovers its truths.

city center998 Communism25 palace of culture7 pkin7 prl49 sightseeing73 tourism66 tours1
Warsaw Insider explores the depths and nether regions of the Palace of Culture to uncover its truths and slay some myths… By Alex WEBBER |...

Ask any foreigner about their first day in Warsaw and likely reminisces are prone to include that first stupefied sighting of the Palace of Culture. As far as initial responses go, ‘woah’ is certainly the most recurrent. I was much the same. Arriving at Centralna on the back of an overnight odyssey, I surfaced from the station’s Stygian underworld in a state of confusion. Surrounded by people talking in an angry babble, I tried to make sense of where I had arrived: none was forthcoming. Then, exiting Centralna, there it was stood out in front: the Palace of Culture. My disorientation was complete. The skyline was less crowded in those years, and the Palace pressed down on the city in much the same way as the charcoal-colored clouds.

As monstrous as it looked, it captivated me. It still does, but my experiences of it have not always been kind. In those first tentative days of living in the capital I joined a guided tour of it. Back then history was used as if it were a weapon against insomnia, and I listened with impatience as stats were reeled off at a rate previously unsurpassed. Those present that day can still parrot the data many years on: 42 floors, 237 meters tall, 3,288 rooms and 40 million bricks. Numbed by information, the mood of our group had turned mutinous by the end. Hoping for some light relief, a backpacker-type piped up to ask if there was any truth to the tale of saber-toothed cats running rampant in the basement: the tour guide stared him down in a manner that suggested he had just been threatened for his PIN code. Clearly, gossip and rumor were off the agenda. 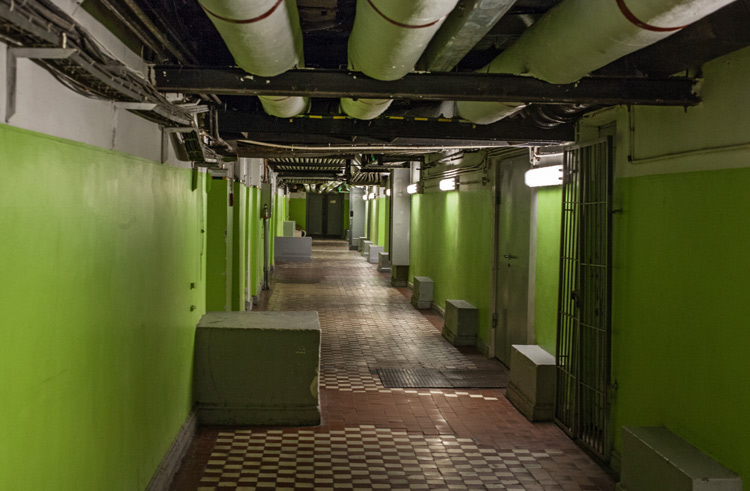 Yet it’s a sign of the times that an institution as byzantine as the Palace of Culture can move forward and offer something more in tune with what people want. Guiding is an art that requires more than knowledge alone, and that salient point has been realized by CREATours. Meeting our chaperone for the morning, Kate, our group bands together at CREATours reception desk for a quick introduction and the distribution of crash helmets. That alone sends a ripple of excitement through those that have gathered: this isn’t a standard sightseeing excursion, it’s an archaeological expedition! In a way, it’s not an exaggeration to admit that’s how it feels.

Having opted for the basement tour, our exploration of the subterranean floors begins with the standard rhetoric regarding the Palace: with much of Warsaw resembling little more than a glowing pile of embers, Stalin made an offer to the newly installed Communist government to aid the city’s reconstruction – the Soviet Union would either fund a metro, a new residential district or a great, big tower to house social institutions. The issue was debated for six hours in the Belvedere Palace, with the final decision falling in favor of the latter option. Officially formalized on April 5, 1952, the wheels were soon set in motion for construction to begin.

Lev Rudnyev was placed in charge of the Soviet architectural team, and his design was widely based on similar towers he’d authored in Moscow – among them, the city’s Lomonosov University. To appease the locals, details that were emblematic of renaissance Poland were to be added, and as Rudnyev and his associates toured towns like Kraków and Zamość for inspiration, equipment and specialists started pouring into Warsaw. On May 2nd, 1952, ground was ready to be broken. In all, it took the 3,500 construction workers just three years to finish the project and what was then known as the Stalin Palace was officially opened on July 22nd, 1955.

U sing one of the stairwells that form part of the Palace’s thirteen kilometers of steps, we find ourselves on a technical floor that’s largely unchanged from those early days. Pipes run low overhead, and one of the group quickly learns the tough way why we’ve been issued with hardhats – ouch. A ventilation room busy with valves and spigots is our first stop, and then the outrageously retro principal control room. Filled with big red buttons and mysterious dials, it’s rife with abstract detail: a burbling fish tank, miniature kegs of beer and a topless pin-up calendar. Sealed off from the world, nightshifts here must be as curious as they come. 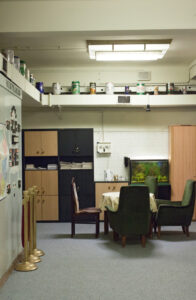 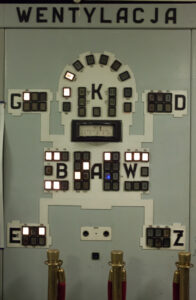 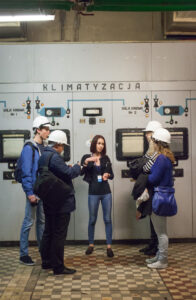 More passages follow and then another set of stairs. As we echo through the corridors Kate continues her spiel: “You’ll hear a lot of silly legends connected to the Palace, but many are false – there is no lake of vodka, and there isn’t a secret train link to Moscow… but we do have cats.” Once peaking at 60, today’s feline population stands at a lucky 13. Peering through a window we observe their green-lit living quarters which comes replete with climbing trees, secretive hatchways and a picture of a dog. It’s here that they rest after a night on patrol.

‘Employed’ to keep the rodent population in check, they aren’t the wild, hissing beasts of local myth, rather well-behaved moggies that keep themselves to themselves – at least, that’s the case most of the time. “Years back,” says Kate, “one managed to turn off the building’s entire electricity supply.” Another, we’re told, strolled nonchalantly onto the stage while Marlena Dietrich performed in 1964. The incident received more column inches than Dietrich’s concert, prompting the furious singer to never return. 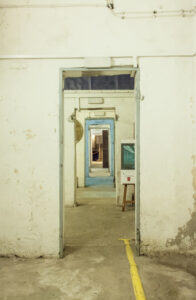 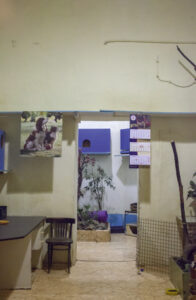 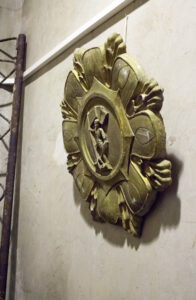 Walking on through the basement and the surprises start stacking up. One side room is filled with material from the building phase (uniforms, a wheelbarrow, lockers and a brazier), another with the Palace’s original revolving doors: “They were switched out in the 1960s,” explains Kate, “because visiting dignitaries couldn’t fit their luggage through them.” Essentially, this underground kingdom reveals itself as a treasure trove of odds and ends: buttons from the first elevator, hefty chronicles, bits of masonry, banners, dicey looking Soviet sound equipment (as well as more reliable units purchased from Phillips), and tiny chairs from Sala Kongresowa.

Once ranked as Poland’s largest concert hall, the Kongresowa famously hosted the Rolling Stones in 1967. “They were invited over by the government,” regales Kate, “but there was just no way they could physically lay their hands on so much Western cash to pay them – instead they offered to reimburse them with vodka.” Guess what, Mick and Keef jumped at the offer. “The thing is though,” continues Kate, “they weren’t allowed to take it out of the country. They were so livid that, like Dietrich, they promised to never play in Poland again.” With whole vats of vodka reputedly left behind in the basement by the Stones, it’s said that for years’ after workers at the Palace pocketed extra cash by selling it on the black market.

Puffing our way back to ground level, the basement part of the tour is over, though a parting perk lies in free access to the viewing platform on the top. Zipping up there, it’s with a new found appreciation of the Palace that we pace around being buffeted by the wind. Once looked upon with a general sense of loathing, it’s a relief that post-1989 suggestions to dismantle the Palace never went beyond the discussion stage. Now truly immersed into the fabric of the city, its tours like this that lend a new insight and understanding into this unwieldy behemoth.

For a gallery of what lies beneath the PKiN, click here.